Construction of base layers

A strong base for the road upper structure

The lower layer basically involves a non-united mixture of crushed fined and coarse stone, as well as crushed sand to reach the desired load capacity and being able to handle with traffic loads so that the underlying sub-grade does not get distorted.

The Mixture makes the difference

In many cases, a united base tour is overlapped over the not united base course. The bitumen, the cement or the lime is highly used as a binder.

Base layers mixed with bitumen

The mixtures containing bitumen refer to the asphalt courses paved in hot or paved in cold, depending on if the mixture is hot or cold. It is said that the base course is hydraulically joined when cement or lime is used as a binder.

When the mixture of mineral aggregates joins to cement or lime, the resulting base layer is called base layer hydraulically united. The mixtures of stone aggregates used for this type of base layer are composed of not crushed gravel or thick aggregate, gravel and crushed or natural sand. More increasingly, said mixtures also include a percentage of recycled construction materials.

Technology makes use of existing materials, only requiring little amounts of binding additives or agents to be added. The road construction materials recovered, linked and unbound are totally reused. A less amount of transportation trucks that have a negative impact on the environment are necessary in comparison with the conventional soil exchange. In addition, the speed method reduces the space requirements and the environmental disturbances which are harmful for traffic. In a nutshell: our respectful method with the environment is to convince to a more increasing number of clients all around the world. 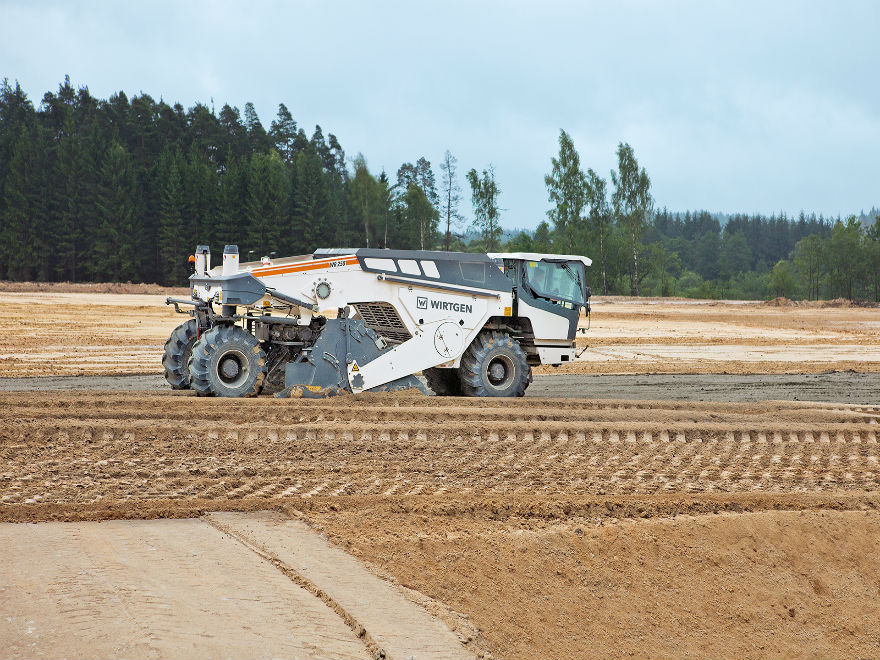 Recycling with foamy cement and bitumen

Little amounts of cement are pre-spread in a first step by a Streumaster spreader followed by a water and emulsion tanker truck. The WR uses its powerful mixing and milling rotor to granulate the damaged pavement layers by simultaneously mixing the cement and by injecting water and foamy bitumen in the mixture chambers through two separated injection bars controlled by a microprocessor. The resulting homogeneous construction material is classified by the final finish by using a grader and then compacted by different HAMM rolls.

A bitumen tank truck goes ahead, followed by a WIRTGEN WM 1000 slurry mixer. The bitumen tank trunk and the slurry mixer provide the WR 240 /WR 240i, WR 250 with the required binders in order to recycle the damaged pavement. The recycler uses its powerful milling and mixing rotor to granulate the harmful pavement layers by simultaneously injecting water cement slurry and foamy bitumen in the mixing chamber through two injection bars controlled by a microprocessor. The resulting homogeneous construction material is classified by the final finish by using a grader and then compacted by different HAMM rolls.

The tractor-towed stabilizer may be used for thick material, coarse or sandy grain with the purpose of making the soil suitable for placement and compaction. If too thick, the material to be stabilized is crushed in the mixing chamber by the milling and mixing rotor. The soft soil is covered with spread lime by, for example, a binder spreader before the treatment. The homogeneous mixture by the grinding and mixing rotor causes the mile to eliminate the soil moisture excess. In the earthmoving operations, the soil improvement becomes in the construction of, for example, dams or embankments, landfills or transportation roads. The soil improvement has also proven to be outstandingly suitable for landfills with clayey sub-soils. The soil processed with adequate binders is practically unsusceptible to water and offers excellent conditions for an additional compaction.